While Facebook and Twitter have been busy pushing their live-streaming options, YouTube, the leading online video platform, has also been upping its live-stream game in order to not only keep in touch, but to supersede these other platforms with their various live tools.

And now, YouTube's upping their live-stream game again, adding a range of new features, most of which are geared towards gamers and gaming content, but which offer more general utility either way.

The first big update is the lowering of the threshold for YouTube streaming.

When YouTube first announced their live-stream option, it was only available to selected users, then they opened it up to all users with 10k or more subscribers. They further reduced that threshold in April, allowing those with 1,000 subscribers to stream, and now they're lowering it again - down to just 100 subscribers. 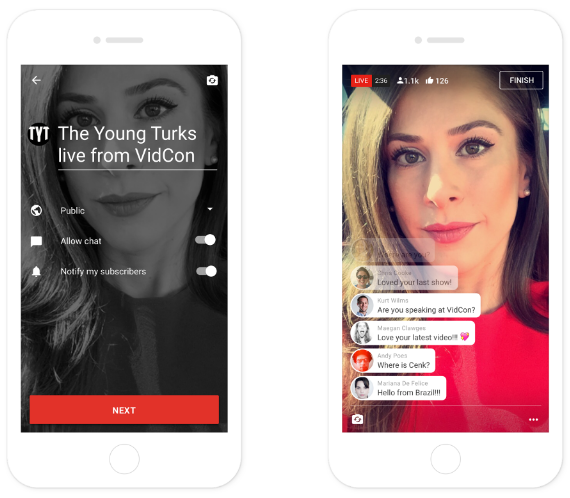 Maintaining some threshold makes sense - 100 subscribers still requires creators to have a level of competency and entertainment factor.

One of the biggest problems with live-streaming is content, and the fact that, as noted by former Blab CEO Shan Puuri: "most live-streams suck". Having the capacity to create live content is great, but being able to create consistent, entertaining streams is a whole other question. The same goes for any form of self-broadcasting - anyone can put content out there, but only good content is going to generate reach and response.

Too much bad content can swamp a platform and turn users away - larger platforms can get away with this to some degree by using algorithms and filters, but you have to reach a certain scale for such measures to be effective.

Thus far, no live-streaming platform has been able to overcome that overwhelming drudge to make it a truly addictive experience - which is what YouTube's trying to counter by maintaining some level of quality control, even though the threshold is lowering to let more users in.

In addition to opening up live-streaming to more users, YouTube's also giving users the capacity to stream directly from iPhones and share their screen, something that was previously only available on Android.

As demonstrated in the GIF, the focus here is on gaming, but the functionality does have use-cases outside of that, with the capacity to stream various functions from your iPhone screen direct to YouTube.

YouTube's also adding a new, ultra-low latency mode to make comment replies during a stream more responsive, while they're also rolling out additional comment moderation tools to give broadcasters more control over the content displayed within their streams.

The broader focus on gaming makes sense - eSports has grown massively in recent times and is on track to become a $1.5 billion industry by 2020. Further underlining that growth, the 2017 Halo World Championships were watched by a combined audience of more than 13 million people across various platforms, while the top professional eSports players are now earning millions of dollars in their own right.

Gamer-focused Twitch is the platform that's most benefited from the eSports boom, now boasting more than 100 million users each month, solely focused on gaming-related content. Most of Twitch's content is live video, with 'let's play' style videos proving especially popular, which is gamers live-streaming themselves as they play.

YouTube's been working to curb Twitch's appeal by building their own gaming-focused network, while Facebook and Twitter are also looking to tap into the rise of eSports as a means to attract the lucrative ad dollars that will follow the gaming audience.

Given this, the addition of gamer-focused live-streaming features makes sense, but as noted, most of these features have applications outside of just game streaming, and with YouTube still leading the way on video content - with more than 1.5 billion monthly active users - they definitely add to the wider appeal of YouTube's live-streaming option.

There's no clear winner in the live-streaming battle as yet, and YouTube, with their reach and expansion, is well on track to put up a fight against Facebook and Twitter's Periscope. Worth considering in your process.