In between the hype around live-streaming and the battle for online video supremacy being waged between Facebook and YouTube (and even Snapchat to a lesser degree), Twitter-owned video platform Vine has continued about its merry way, expanding its user base and growing its cultural influence. That influence is important - a growing number of Vine stars are now crossing over into the mainstream, and making big money as platform experts, with advertisers seeing the potential in using their skills in making short, attention grabbing content and leveraging their established audiences to help spread the word about their products.

Vine content, as many are aware, has great viral potential - it's quick, it's shareable and it's already being credited for starting a great many trends. One of the most notable of those trends is the Vine remix - in a recent article for USA Today, up-and-coming rap stars Silento, T-Wayne and Chedda Da Connect talked about the influence that Vine content has had on their careers, all noting that their songs have 'exploded' on social media thanks, in large part, to Vine clips of people creating memes which incorporate snippets from their songs.

As you can see from the figures, that Vine's been looped more than 14 million times - and while the metric of 'loops' is not as immediately as translatable as 'views', quick-hitting comedy clips like this are playing a significant role in the rise of popular trends, generating millions of shares across the wider social eco-system and expanding the reach of both the creators and the music.

Vine knows this, and today, the video platform has announced the release of a new remix tool to help fuel the use of the platform for this purpose.

This is the Remix...

Seeing a funny Vine often leads to others wanting to replicate it and provide their own take on the same content, particularly when that Vine is based on a song line or moment. Vine's making this easier - now, when you're watching a Vine and you want to use that same snippet of audio, you can. As highlighted in the video above, while you're watching a Vine, you can click on the three dots at the bottom right of screen for more options. One of those options will be 'Make Audio Remix' 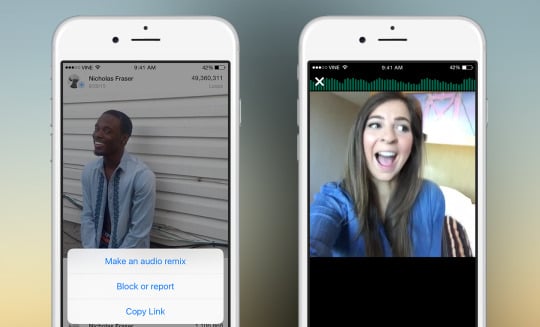 Once clicked, you'll be taken to the camera screen with the audio track from that Vine loaded up in the progress bar, ready for you to add your take on the same (as shown in the screenshot on the right above). Users can then either make a new recording or import a video from their camera roll as normal, enabling them to quickly and easily add to trending memes.

In addition to the new remix capability, Vine is also making it easier for users to find other clips which use the same audio clip or song.

"When someone uses our new audio tool to make a Vine, we display info for the source Vine, just like we do when people use our app to add music tracks to their Vines. This means that you can see the original Vine from which a remix or remake was created. In building these features, it was important to us to credit creators and make sure people could see which Vine led to the creation of hundreds or even thousands of Vines."

As shown in the above Vine, you can click on the music note in the bottom right of the video to open up a drop-down panel which shows the source post. You can then watch the source, as well as other Vines which have used the same audio by clicking the arrows to the right and left (to re-watch previous).

Vine's also updated their search system - now, when you search for a track name on the 'Explore' page, you'll be shown Vines that use that track, making it easier to follow along with different remixes and trending content related to popular music.

These are both clever additions which add to the Vine experience and cater to audience demand. Vine memes are a fun and popular means of expression, and with more Vine stars being able to leverage their Vine skills into careers, that, in turn, will lead to more creators turning to Vine to hone their skills and showcase what they can do. In this sense, Vine is especially appealing, as it's only 6-seconds. That time limit levels the playing field to a degree, as your budget is not as relevant as your content in such a short space.

In it's two and a half years of existence, Vine's been able to establish its place as a key platform, a tool that serves a clear purpose in the wider zeitgeist of popular culture. With new additions like this, and the recent update to generate more exposure for Vine creators through Twitter, Vine's showing that it's very in-tune with its core user base, and very aware of what works. While monetization is still not the focus for the platform, their steady growth suggests that it will remain a key component of the wider social eco-system for some time to come.