LinkedIn is Updating its Group Categories to 'Listed' and 'Unlisted'

LinkedIn groups were once a thriving, active space, where many robust discussions took seed, and lead to collaborative opportunities.

But like all good things, marketers eventually ruined them. Spammers realized that they could get notifications into your LinkedIn update listing, or even your email inbox, through group posts and contacts, and they used such capacity to the point where LinkedIn groups became inundated with rubbish, to the point that they just weren't useful anymore.

Every now and then, LinkedIn comes out with a new update which suggests that it's going to make groups a bigger focus once again, and clean up the junk. But this far, none of those revamps or changes has really improved the situation.

If LinkedIn can, eventually, get it right, groups can be hugely beneficial. But it still has a way to go as yet.

That's why this update seems a little underwhelming - this week, LinkedIn is sending out an update to LinkedIn group admins which details an upcoming change to how the platform titles its groups. 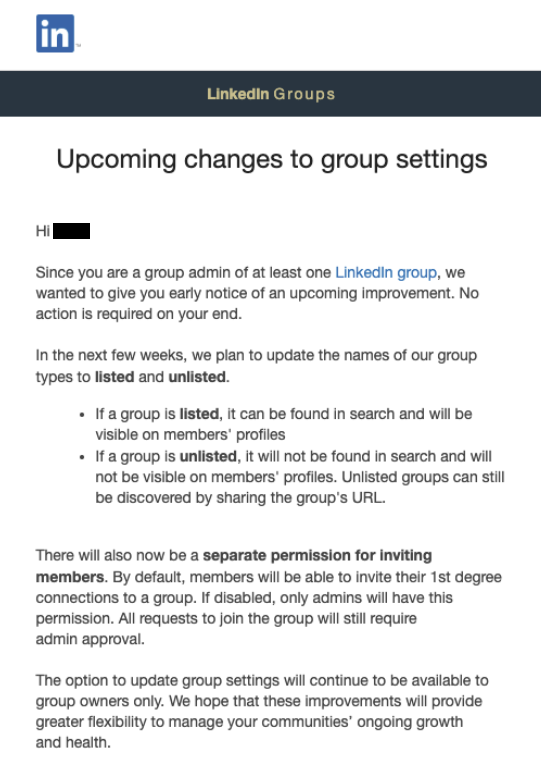 As the notification (shared by social media expert Matt Navarra) explains, LinkedIn is changing its group types to 'Listed' and 'Unlisted', as opposed to the current 'Standard' and 'Unlisted'.

The subtle clarification will ensure that users are aware of what each means - instead of 'Standard', the 'Listed' title specifically states that your group will be listed, and discoverable in search. Unlisted, or private groups, remain the same.

In addition, LinkedIn is adding the capacity for group admins to maintain more control over group invites, with the option to let people invite their connections to join or not.

So, not a massive update, but an update nonetheless.

The announcement is actually in-line with other recent LinkedIn group updates, in being underwhelming. Last year, LinkedIn announced its 'new LinkedIn groups experience', which added the capacity to post videos, while also giving admins more control via the mobile app. But not a lot else.

As noted, LinkedIn groups do hold potential, but LinkedIn hasn't quite advanced them enough to get people to come back just yet. That said, there are some very engaged LinkedIn groups, and there is existing potential for those that have the time for consistent community management.

Hopefully, updates like this are small steps towards that next evolution for the option.