The latest reports would have you thinking that Twitter is struggling. There was the backlash over their Q1 numbers which lead to CEO Dick Costolo stepping down, then, as part of their Q2 announcement, CFO Anthony Noto said that Twitter wouldn't be seeing any significant growth in active users for 'a considerable amount of time', which wilted analysts hopes. The subsequent reportage of Twitter's market performance has suggested that the platform is on the way down, that users are turning away, that it's going no where. But users, of course, are not necessarily investors, and users seem quite happy with how Twitter is traveling.

Underlining this, Twitter has once again proved it's growing popularity and place within the wider communications landscape with MTV's VMAs, held on Sunday night, becoming the most tweeted non-sports TV event in the history of the platform. 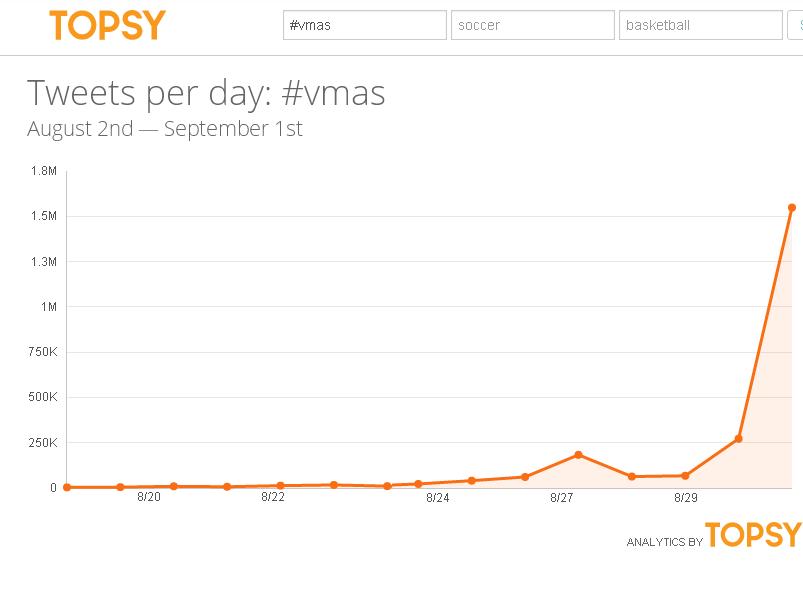 Amidst Kanye West's declaration of his 2020 Presidential campaign, Nicki Minaj beefing with Miley Cyrus and Justin Bieber break down to end his performance of 'What Do You Mean?', Twitter was alight, with more than 21.4 million tweets across the US referencing the MTV event.

By comparison, the Super Bowls in both 2014 and 2015 got close to 25 million tweets each, while last year's Grammy's drew 13.4 million and the Oscars hit 5.9 million. According to Marketing Land, the VMA tweet volume was up 69% on last year's event, with VMA tweets generating more than 676 million overall impressions. That's a lot of real-time tweets for a network that's struggling to meet user demand.

The most tweeted about event of the night was Kanye West's announcement that he'd be running for president in 2020.

No one knows if he's for real. Given Kanye's history, he probably is. Kanye as Prez and Kim as First Lady - a pop culture dream come true.

Interestingly, Channel 4 News editor Paul Mason has published an article today in The Guardian which looks at the growth problems at Twitter, which, Mason suggests, may not be problems at all.

"Twitter's problem is that, as a "solution", it already works. It is, to use the two words hallowed in engineering, "good enough". It conforms - with some qualifications - to criteria long-ago outlined by software veteran James Bach: it has sufficient benefits; no critical problems; the benefits outweigh the problems; and further improvement would cause more harm than good."

Mason goes on to outline why Twitter is fine as it is, but the market will always want more - any platform that's not able to demonstrate how it can monopolize the market and monetize it's user data is consigned to the scrap heap by analysts. But it actually works fine, and it provides a utility. The VMA numbers definitely underline this contention, and while Twitter does still have room to grow and could do better at demonstrating its utility to a wider user base, Mason does make some relevant points. As he notes in summary:

"I would find it very hard to imagine a world without Twitter now. But I can easily imagine it as a public utility. The problem is, Wall Street can't."

That statement sums up the challenge that Twitter faces. The answer, I guess, it that they could have avoided any such scrutiny by opting not to become a public company, but regardless, Twitter is now in a position where it's place in our communications landscape is largely cemented, but it's future growth prospects and market positioning, at least from Wall Street's perspective, are far less so.

So what does this mean for the future of the platform? Surely, a platform with such high interaction is in a strong position and should be able to capitalize on that audience to appease market analysts whilst also benefiting their community and users. Twitter's working on ways to do just that, but the ongoing lack of a new CEO raises questions about the direction of the micro-blog giant. Right now, the appointment, or non-appointment, of a new CEO is the key element that will drive Twitter to the next stage, or see it fade further as challengers like Instagram and Snapchat power on past. Twitter's strengths are great, indeed, and the VMA numbers underline that, but it's yet to take a bold step towards a new direction, likely because they're waiting on an appointment decision for their new leader.

Or are they waiting on a takeover? Rumors have swirled about Google's possible interest - could Google be waiting to see how the new tweets in search arrangement goes, what sort of benefits they see from that partnership, before they move to buy out Twitter entirely? Maybe that's why the CEO appointment is on hold?

It's all speculation, obviously, but the one thing you can be sure of is that Twitter isn't going anywhere, engagement on the platform is still strong. How they capitalize on that audience attention could take it to the next level or leave it where it is, but regardless, it remains a social network that must always be considered in any social marketing plan. Report's of its demise are greatly exaggerated.