With BeReal on the rise, it was only a matter of time, really, before the established players in the space realized that BeReal’s key value proposition is more of a function than it is a solo app or network, especially given that it’s not algorithm-based.

And functions can be copied, and broadcast out to much bigger audiences in the established apps.

As outlined by Snap:

Which is pretty much exactly like BeReal, and Instagram’s new Dual/Candid options, though Snap is looking to push the functionality beyond situational seflies, and more towards participatory, creative trends.

Which is more like TikTok - in essence, Snap is copying other features, but it’s also at least trying to put a more Snap-specific spin on its variation, as opposed to just blatantly replicating the same functionality in its app.

But at the same time, it is pretty much the same thing. 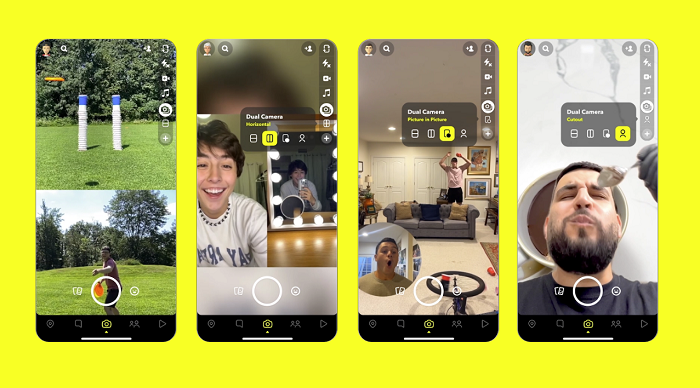 As you can see in these examples, users will have the choice of several Dual output formats, including vertical, horizontal, picture-in-picture, and cut-out.

And aside from enhanced creative capacity for regular users, that could also open up more interesting options for UGC, with brands now able to invite participation in all new ways, which could help to spark new trends in the app.

Snap actually previewed the option at its Partner Summit back in April as a part of its ‘Director Mode’, which provides more advanced editing tools within the app, to facilitate more creative expression

Though where, exactly, Snap is on this front is unclear, with the company also being forced to slow hiring and cut projects, due to global economic impacts and limitations caused by Apple’s iOS opt-in data privacy update.

Snap ads have become less effective as a result of the change, which has then seen advertisers reduce their Snap ad spend. And while the platform still touts its unique, and valuable younger audience reach, it is currently on the back foot in this respect, which may delay its more advanced projects, including, potentially, its AR-enabled Spectacles.

Given this, it makes some sense that Snap’s looking to break out some of its Director Mode features into the main app, while Dual mode also ties into broader usage trends, and could be a valuable engagement-focused addition.

Which is also why Snap is putting the function ‘front and center’ in the function bar in the app, as opposed to making it an additional Lens option, to help encourage usage.

Will it become a big thing on Snap? Well, broader trends would suggest that there is interest, while the more unique presentation variations do open up new content possibilities.

Snap also has a solid track record of understanding its audience, and incorporating trends that align with their behaviors, so it could well be a hugely valuable addition for the app.

And as noted, it also opens up a lot of new options for brands, and could be great for related promotions heading into the holiday shopping push.

Snap’s Dual camera mode is now available to all Snapchatters on iOS using iPhone devices XS/XR or above. Availability on Android will follow in the coming months.