Another week, another set of Facebook tests and features spotted out 'in the wild'. If you're not aware by now, Facebook is always testing new tools and features - some of these changes are major (like News Feed updates or their new video content platform), while others are more subtle.

But it's in those subtle changes that we can see where Facebook is looking, what audience trends are guiding them, and where we can expect to see them evolve next.

To help you stay on top of these smaller shifts, we're co-ordinating them into a weekly listing of five updates Facebook's testing or has rolled out that may have gone under the radar.

Here's our five for this week - starting with new geographic controls in Facebook Live.

This week, we were alerted to a couple of new options - the most notable being the addition of Geo Controls which would enable broadcasters to better target their posts to specific users in specific regions.

Why would you want to potentially limit your Facebook Live reach?

There may be times where you know your post is going to resonate with users in a specific region or time zone, or those attending an event. By limiting the reach, you could help Facebook better target your post, ensuring it's seen by more people within that segment, as opposed to wasting reach on others who might not be so interested (similar to Facebook's post-level targeting).

For example, if you were going live from your retail store announcing a one-day sale, which only related to in-store customers, you might want to only reach people within the radius of your location. Targeting here could help maximize that reach by narrowing the focus.

In addition to this, Facebook is also testing some new layouts for Live, both on mobile and desktop.

These changes have been in place for some users for a while, and may help add additional, functional improvements to the process.

Facebook has also acquired a German company called Fayteq makes it possible to add objects to existing videos, or remove objects from videos.

Fayteq have created various plug-ins for video production tools which enable publishers to add in overlays and special effects like those shown in the sample reel below.

Using similar process, they can also remove elements, with the video tracking technology able to translate and account for relative movement.

How Facebook might be looking to use Fayteq is not clear at this stage, but there are various ways in which they might add the options into Facebook Live, or within the wider context of their augmented reality tools.

We'll keep you updated on any future developments.

Facebook has also announced that they're expanding their Marketplace tab to users in Europe.

Facebook first launched Marketplace to users in the US, UK, Australia, and New Zealand last October in response to the growing use of buy swap and sell sites on the platform (at the time, Facebook noted that 450 million people visit buy and sell groups each month). Since then, use of Marketplace has continued to grow - Facebook says that in May, more than 18 million new items were posted for sale in Marketplace in the US alone.

And while the focus of Marketplace is on personal sales, there is some marketing potential, particularly for very small businesses and/or home-operators looking to generate more exposure.

The Marketplace tab will be rolled out to users in 17 European countries from today.

Here's an area where it feels like we should be putting more focus. Over time, Facebook is working on developing new tools to provide recommendations and audience pushes based on user data - like this new recommendation. 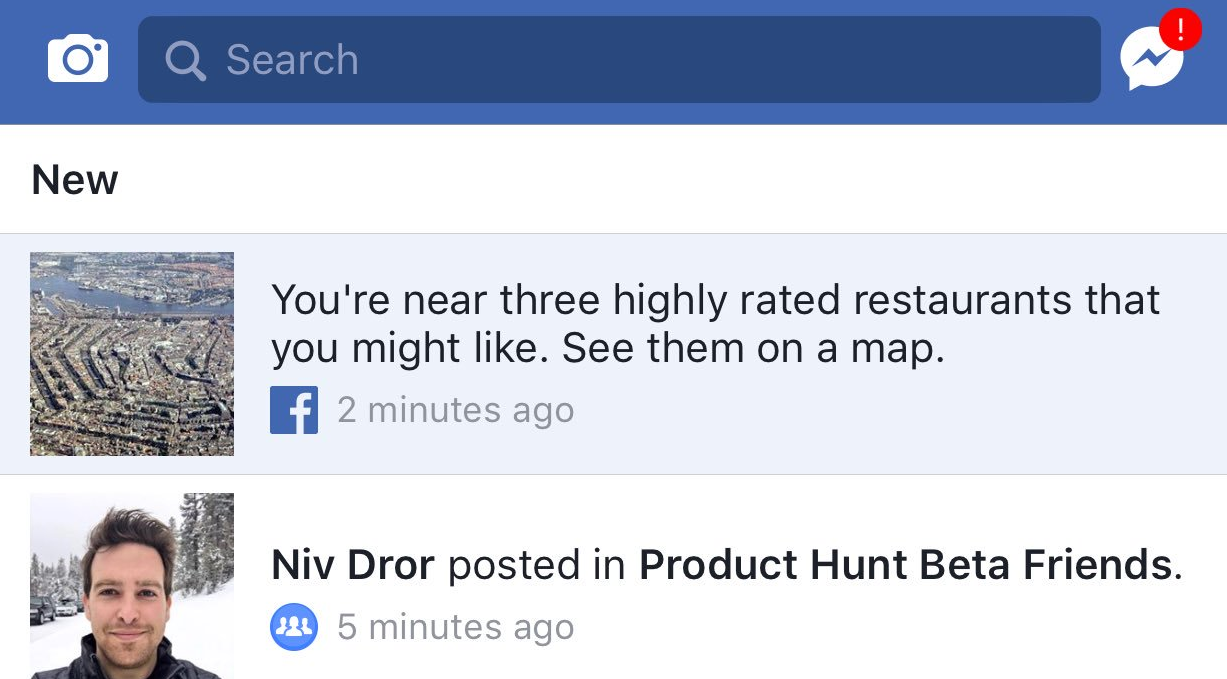 Facebook released a similar tool along the same lines back in March, called City Guides, which uses insights from your network to highlight potential places of interest in certain cities. 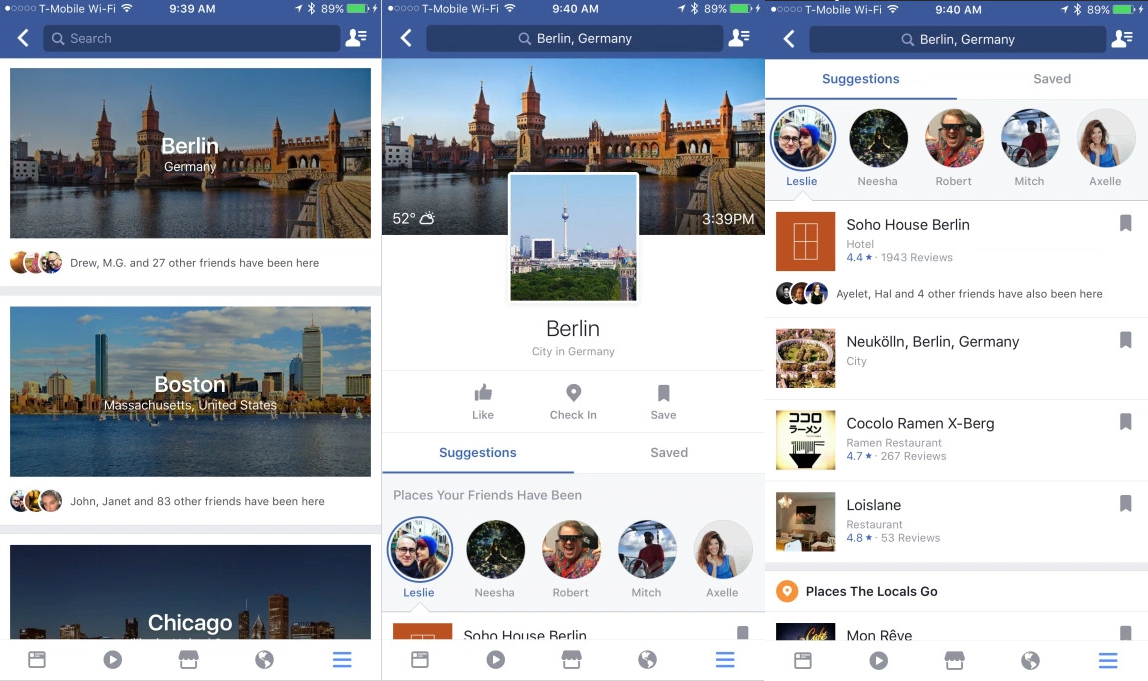 And while tools like this are fairly non-intrusive, they point to Facebook's wider efforts to become more than a social network, and how they can utilize their unmatched data pool to deliver more personalized - and thus, likely more relevant - recommendations. Which could have significant SEO and discovery implications.

This is particularly relevant in the context of Messenger bots - bots haven't taken off as Facebook might have liked, but they are developing capacity to have bots provide automated recommendations and suggestions based on Facebook data. The better Facebook gets at this, the more relevant those recommendations become - and as people come to rely on these tools more, it will also form a more relevant consideration for those looking to maximize their exposure.

These latest variants are fairly minor, but they're tests for a wider push - and with 2 billion users, Facebook can be significantly influential in driving traffic to businesses.

Worth watching this space.

And the last Facebook update of note this week is their latest effort to get into the Chinese market.

Facebook's been trying to get into China ever since being blocked in 2009, with CEO Mark Zuckerberg holding various meetings with Chinese officials and the platform adding tools to cater specifically for Chinese requirements. And their work did look to be advancing earlier this year - that is until the Chinese Government banned live-streaming in June and looked to be further cracking down on social networks and their applications.

But Facebook clearly hasn't given up - their latest effort is a new app called 'Colorful Balloons' which is effectively a duplicate of their Moments app, built specifically for China. 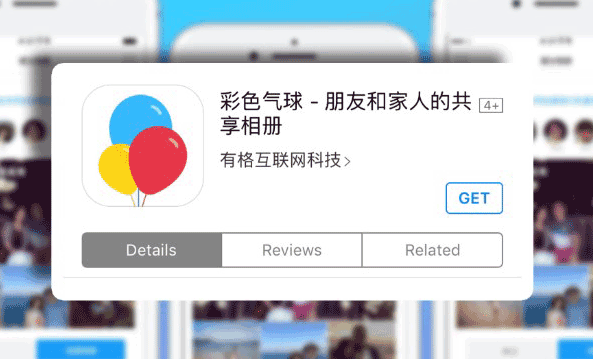 Facebook has reportedly launched the app in China under a different name, avoiding connection to Facebook - but at the same time, they were no doubt aware the connection would be evident. It's hard to say exactly how this tactic relates to Facebook's wider plans for China, but Facebook says they're 'learning more about the country' as they look for ways in.

In terms of marketing opportunities, reaching China's 1.4 billion people would open up a whole new range of ways for businesses to use the platform to expand their audience. Facebook's already promoting the potential of cross-border opportunities, and China would be the jewel in that crown - there are obviously a lot of restrictions and limitations on how any such deals could work, but Facebook's mission is to 'connect the world', and the world's most populous nation is obviously a key part of that endeavour.